Registered visitors may download the entire Part 2 of the book at the Btm Of Page
Total 55 — 8 1/2 x 11 PDF pages, 3.69 MB with astronomical images 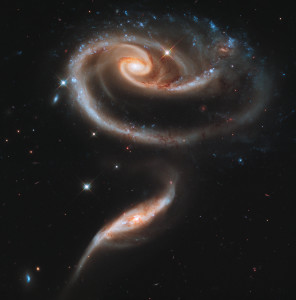 In Part 1 the core findings of the mathematical physics research work about which this book is composed are presented. There descriptive equations are presented which described many of the measured physical properties of the elementary electromagnetic waveforms, the leptons and the photons. The equations which had been found matched their objective physical properties to many decimals of accuracy.

In this Part 2 the results of the specific mathematical physics research work are extended into topics of a more speculative nature. That is the material presented in this Part 2 is not backed by the accuracy of mathematical decimals. In this part there are mainly verbal discussions of ideas and concepts related to the material presented in Part 1. These discussions tend not to be technical in nature and do not require any knowledge of what has been written by persons in the academic hypothetical physics community. The discussions in the next several reports are simply presented, without any proofs or derivations, as food for thought for persons interested in the subatomic physics realm.

Chapter 2.1 Implications And Consequences Of The Lepton, And Quark Equations
This report covers some of the implications and consequences of the equations discovered which describe structures for both the leptons and the photons alike. There are also implications reported arising from the discovery that the quarks appear to be true 4 dimensional particles inhabiting a realm of 4 spatial dimensions. The implications discussed cover consequences; for the elementary electromagnetic particles themselves, for the others elementary subatomic waveforms (particles), and for cosmology in general.

Aside from their differences of mass-masslessness, charge-chargelessness, and difference intrinsic spins, the two species photons and leptons have many things in common, as least mathematically. In the reports describing the mathematical structural models for these particles some of the implications of the models were discussed. There though the discussions stayed with aspects which directly could be supported by the mathematics which was presented there.

Here in this report discussions move further afield. This is done by primarily examining patterns which were set by the mathematical descriptions of the wave form structures for both the leptons and photons. Examining these patterns questions can be asked, what if a particular pattern is extended to other particles or to cosmology in a particular fashion? Discussions here touch on topics peripheral to the core mathematics of the lepton and photon reports and which cannot directly support by actual decimal places. A person could call the discussions in this report speculation. Never-the-less the discussions here do raise some interesting ideas for consideration by the broader scientific community.

Chapter 2.2 Towards A Periodic Table Of The elements Of Physics
This report stresses the dire need for simplicity, returning to the basics of particle physics, and the organizing of a Periodic Table of the Elements of Physics (PTEP). The perpetual chase for a unification of the basic forces and the elementary particles has lead physics further and further away from the questions which actually need to be asked and the information which is already available. Just what are mass, charge, or color? How do these relate to mathematical-geometric structures of the particles themselves? How do the gravitational force and the electromagnetic force pair relate to each other or to the particles which respond to them?

Based upon the mathematics of this overall body of work several Periodic Tables of the Elements of Physics are proposed. These include the elemental fermions, bosons, and basic forces. These tables are based upon a Building Block Model of Subatomic Physics (BBMOSP) in which the big, complex, or high energy composites are built up from the elementals. This is the opposite of all the top down models which assume that the elementary particles are lessor derivatives of some super massive originating unity and uniformity. Based upon mathematics of this work a PTEP can probably be constructed by a mathematical analysis of the masses of the elemental particles alone! This analysis should be particle centric.

How particles and forces can be transmuted into one another or where they come from should be or soon will become unnecessary and very expensive experimental spurious side issues. With a Periodic Table of the Elements of Physics (PTEP) based upon a Building Block Model of Subatomic Physics (BBMOSP) particle physics, both hypothetical and experimental, should become very much simpler, more direct, and many orders of magnitude cheaper.

Chapter 2.3 Towards A Mathematical Description For the Masses Of The Quarks
This report extends the work of Part 1 by outlining suggested ways to begin discovering equations which would describe the masses and other measured physical properties of the quarks. The mathematical-geometric model found for the charge of the quarks as corresponding to the curvature of certain vector curves in four spatial dimensions is presented in Chapter 1.3 and is not repeated here.

Part 1, Chapter 3 has shown that the charge of the quarks, and presumably their masses, could be modeled by vector curves occupying 4 spatial dimensions in the form of a pair of linked circles. The idea was shown to be valid that the information discovered for the leptons and photons can be used as a starting basis for modeling the quarks. There are logical expectations that wave structures for the neutrinos and quarks form some general pattern with those discovered in this work for the leptons. But just what is this pattern? Such general logical expectations are not much help is formulating mathematical equations which must bear out many mathematical decimal places. Suggestions are made here as to how to do this.

Chapter 2.4 Future Work
This report lists many of the possible research or calculational efforts which have been promulgated by the core research of this body of work. The correlative trial and error mathematical physics research of this overall body of work has set a basis for many areas of future endeavors. These include other calculational efforts, possible future physical research experimentation, pure mathematical studies, and many more such endeavors in diverse mathematical-scientific arenas. These possible future efforts are listed in a short catalogue like form and are not listed in any particular order of importance. There may be many items which have not yet been thought about, but which persons with other academic backgrounds might find interesting or exciting.

PART 1 List Of Contents
Please note the below listings do NOT transfer the reader to the indicated location in this Part of the book. The PDF file must be downloaded. The listings are just to indicate the depth of material contained in this book.